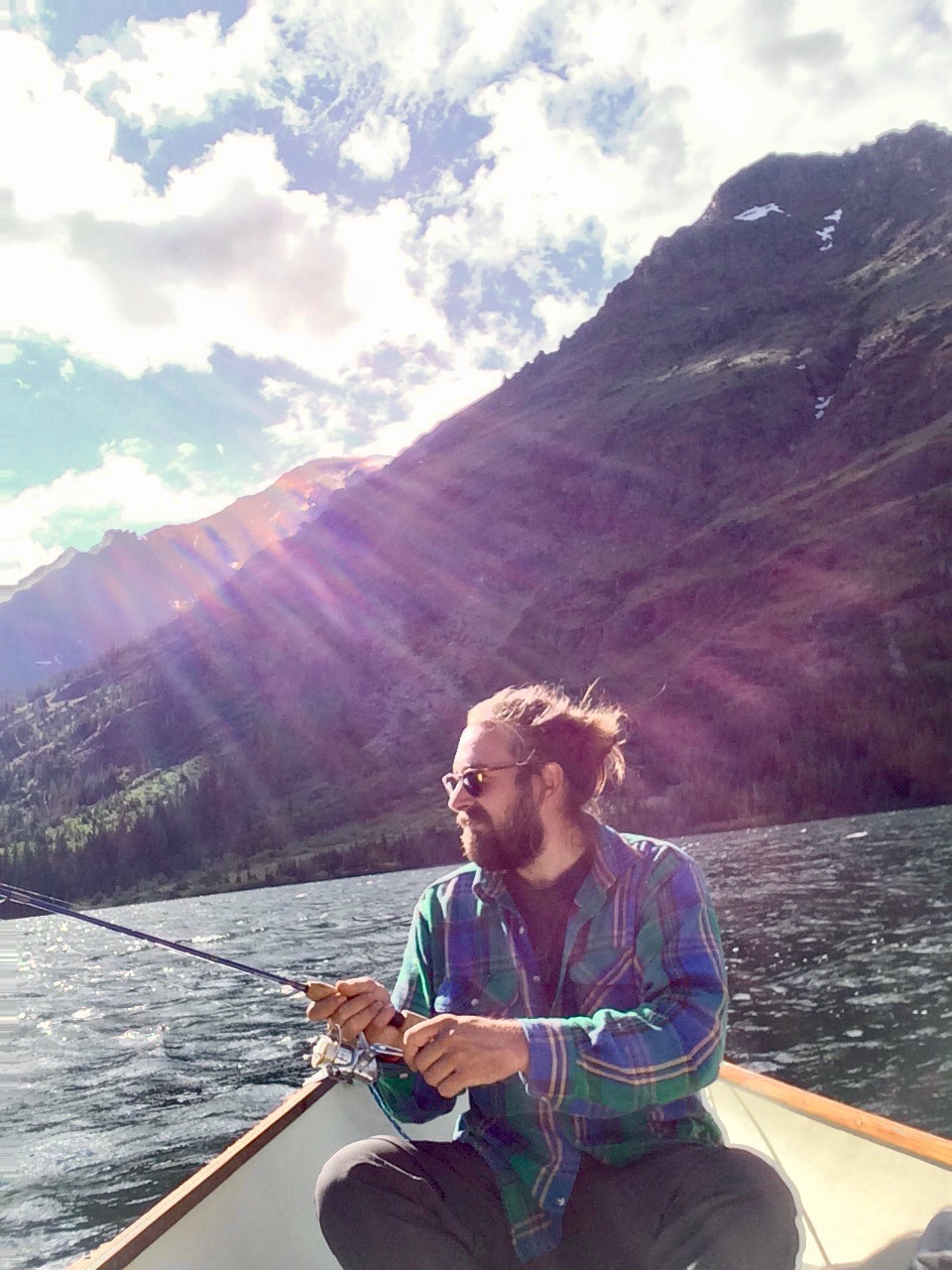 Education: BS Physics Honors: The University of Texas at Austin

Biography: I am a PhD student in the Department of Astronomy at the University of Washington. My interests include climbing mountains, mountain biking and amateur dendrology.

My research is focused on the gas that surrounds galaxies, the so-called circumgalactic medium (CGM). The CGM is responsible for fueling star formation and thus galaxy evolution over cosmic time, but its physics are dominated by the complex interplay of gas accreting onto the galaxy balanced by feedback from exploding stars in the galaxy.

I have constructed a large spectroscopic database that required the use of statistical and machine learning methods to tease out the complex gas physics taking place in the CGM.

I received my BS in Physics with honors from the University of Texas at Austin before moving to New York City to work as a research assistant in the Department of Astrophysics at the American Museum of Natural History. After five amazing years, I chose to move to Seattle to pursue my PhD at the University of Washington. I am also a member of the Big Data IGERT Fellowship program through the eScience Institute at the UW. 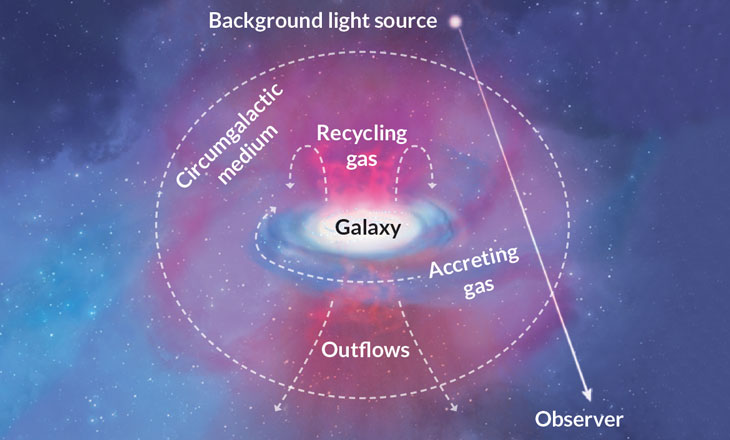 The circumgalactic medium
The circumgalactic medium lies at the intersection between the kpc-scale drivers of galaxy evolution and the Mpc-scale gaseous filaments that make up the large scale structure in the Universe. As a result, the CGM may hold the key to answering major outstanding questions relating to galaxy evolution such as: 1) How do galaxies sustain star formation? 2) Conversely, what quenches galaxies? 3) Where are the baryons predicted from cosmology, and what does their spatial distribution tell us about galaxy-scale feedback processes (Tumlinson+2017)? Providing answers to these questions necessitates generational advances in our understanding of the nature of the CGM and it's role in galaxy formation.

CGM2: COS+Gemini Mapping of the Circumgalatcic Medium
By combining the power of COS on the Hubble space telescope and the 8m Gemini telescopes we are building one of the largest catalogs of observations of the CGM to-date! I find the survey design is best explained with pictures so check out the pic above. We use bright background sources, in this case quasars, to probe the intervening gas around foreground galaxies.
With the help of the Werk SQuAD (Student Quasar Absorption Diagnosticians) we identified every absorption in the 22 quasar (QSO) HST-COS spectrum. This was a huge amount of work, and the undergraduate members of the SQuAD were invaluable in making this happen. 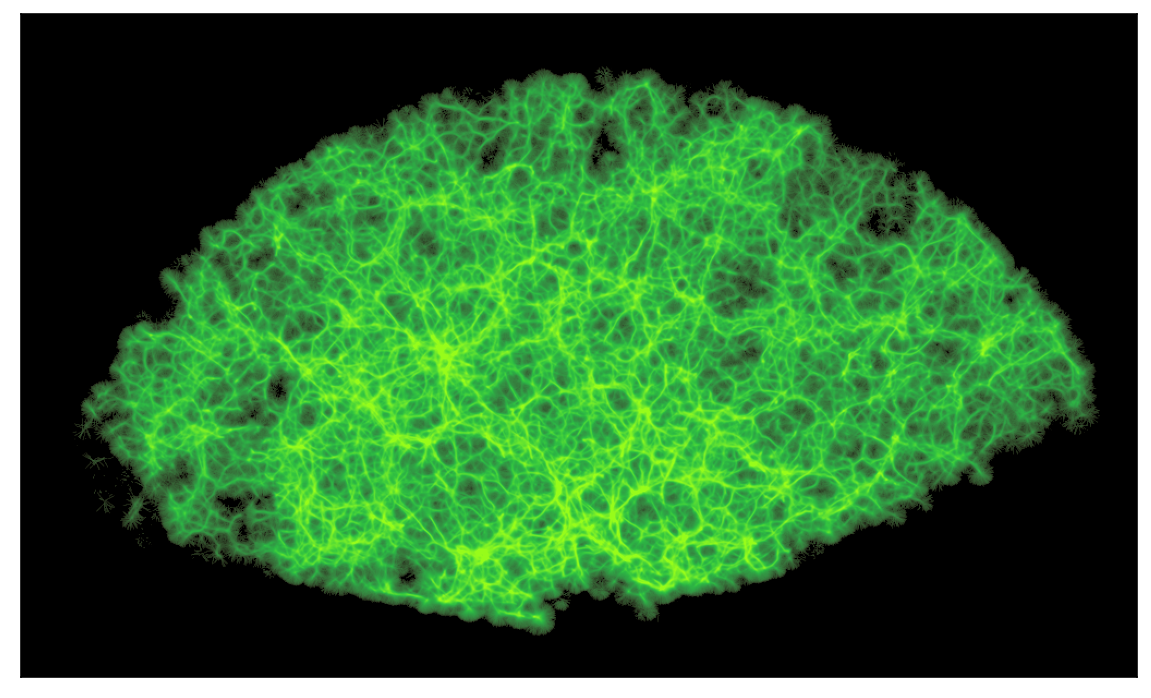 Mapping the “Cosmic Web” with Slime Mold
A tenet of modern cosmology is the existence of the “cosmic web”, a vast filamentary structure formed via the collapse of matter due to gravity. This structure is ubiquitous in cosmological simulations yet challenging to observe due to its diffuse nature.
Recently, a new technique was developed which is inspired by the growth and movement of Physarum polycephalum slime mold to map the cosmic web of a low redshift (z < 0.01) sub-sample of the SDSS spectroscopic galaxy catalog (Burchet et al. 2020, Elek et al. 2020). However, this limited volume limits the statistics and observational techniques that can be applied to this slime mold generated density field. I have applied this algorithm to the classic SDSS and eBOSS surveys which expands the volume mapped to z < 0.5. The slime mold density map shown in the accompanying image was recently released as a value added catalog (VAC) and released by the SDSS DR17 team (Abdurro'uf et al. 2021, Wilde et al. in prep.), and will allow astronomers a new way to explore the cosmic web. Applications of this density map include constraining the role of environment on galaxy evolution and the role of galactic feedback, more efficient follow up observing strategies for gravitational wave targets, and interesting tests of cosmological constants and dark matter candidates.